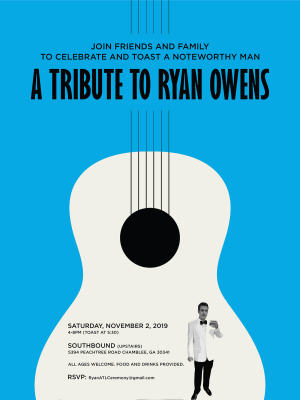 A quiet life that resonated loudly has left a ringing in the hearts of many as Ryan James Garvey Owens passed away on Tuesday, October 22, 2019 due to the effects of the cancer he fought so bravely. Cancer, however, never defined him.

Ryan was born in Boca Raton, FL on January 17, 1982 when the town was indeed small and unassuming. He loved Boca Raton, and returned years later, to the place he always considered home. He was the product of a hard-working, classically middle-class family, and became another hard-working man who wanted to earn his place in the world through his actions and the way he treated others. Ryan moved to Lilburn, Ga., an Atlanta suburb, when he was five years old on New Year’s Eve 1987. A sleet storm hit days after moving there, prompting the kindergartener and his brother, Colin, two years his senior, to find their father Mark’s screwdriver and remove the trucks from their skateboards to make make-shift snowboards.  Those flakes were no fluke; they inspired a love of snowboarding that led him to take many trips to the slopes of Utah, Colorado, British Columbia, North Carolina, West Virginia and Switzerland. He also excelled in other sports throughout his life - including baseball, tennis, swimming, racquetball, golf and whatever games he and the neighborhood kids concocted that week. Athleticism was a natural gift for Ryan, and he won championships and set records in many of them.

But being in Metro Atlanta had another much more profound impact on his life. It is where he met his future wife, Margarita Palacios. They met in middle school and, without knowing it then, had found their soul mates. They were each the missing puzzle pieces in each other’s hearts.  They were married in 2013 but were together for a total of over twenty years. Sometimes you have the wisdom to know what you have and hang onto it.

Wisdom is something Ryan always had, but always downplayed. He was incredibly smart, but he often discounted that because academics came so easily to him. As a result, he applied himself to more creative outlets with much more vigor, such as music, writing and acting. He had a musical ear and could play virtually any instrument after about 30 minutes of tinkering, but especially loved guitar (his pearl-inlayed Taylor was his prized six-string). He also wrote music and poetry. And he was a regular in high school theatre, namely as Oscar in The Odd Couple and as Kenickie in Grease, and was also a regular featured zombie in the AMC show The Walking Dead. He was featured in a PBS-produced movie, which was interesting in that he grew up watching countless programs on public television including 1980s cooking shows with his mother, Leslie, a self-trained chef. That early exposure to cooking never ceased. Ryan loved being an alchemist in the kitchen, too. Even though he was an introspective introvert, he loved social occasions and getting together with friends and family. And he was always quick to be the first in the kitchen to do the dishes, too.

That mindset of service to others prompted all sorts of pivots in Ryan’s life, but probably none more impactful than deciding to leave a safe sales job in Corporate America, after attaining a Risk Management degree at UGA’s Terry College of Business, to join the Atlanta Fire Department at age 29. He was one of the oldest in his class at the fire academy and finished at the top of his class, allowing him to choose his station. He selected Station 22, based in one of Atlanta’s most challenging neighborhoods because he wanted to be where he could have the greatest impact. He said, “if I am going to do this, I want to run. I want to dig in and do the real stuff.” That he did, saving countless lives and consoling the families of countless others who had lost loved ones in various tragedies. After four years in the AFD, his grandmother, Claire Garvey, required 24-hour nursing care as she battled advanced cancer and Ryan opted to leave his calling and take care of her for the remainder of her life. They became best friends and he was by her side when she passed.

Ryan and Margarita decided to move to Boca Raton (his birthplace), shortly after Claire’s passing and they lived in a beach apartment for a couple years before buying a home a few miles away, only a mile from the home he lived in as a baby. They settled in with their cat, Mumbles (named after a character in the Dick Tracy comics and movie - he was also a huge movie buff) and lived there until his passing. While cancer was the villian in this story, it was Ryan who was the hero. He never gave up. He even said, after multiple “homerun swing” treatments, that “he’d rather go down swinging that just wait around for it to get him.” A private, humble and deflecting figure, Ryan never wanted to impose on others during his tougher times in life - even in the end. From the time he was a toddler, he wanted to “do it myself.” And he did.  But he was never alone. And he isn’t now either. He touched so many, impacted so many, and is missed by so many. All we can take with us is the impact we have on others, and the crater he leaves his vast. And it will never be filled.

Ryan is survived by his wife, Margarita Palacios, his parents, Leslie and Mark Owens, his brother, Colin Owens, sister-in-law Jennifer, and his two nieces, Ellie and Jules. And, of course, his cat, Mumbles, who also never stops talking about him. :-)

A Memorial Service will be held at 12:00 Noon on Monday, October 28 at Glick Family Funeral Home in Boca Raton.  A reception will follow at the Dubliner Irish Pub in Boca Raton.

For all of our friends and family in Atlanta, Ryan's life will be celebrated on November 2nd in the afternoon at Southbound in Chamblee, 5394 Peachtree Rd., Chamblee, GA  30341.

*Exact times and details will be posted shortly*

Those interested in contributing to a charity with special meaning to Ryan are welcome to do so.  Please consider a donation to the University of Georgia College of Veterinary Medicine to support the Bradbury Chair in Feline Health and Research.

Or donate online: https://gail.uga.edu/commit. Choose College of Veterinary Medicine and write in "Chair of Feline Health" as the area of support.